A traditional path to a drug addiction problem might sound like this: First, the person makes a choice to use a drug just one time, just for fun. Next, the person finds that feelings of sickness appear when drugs aren’t taken. And finally, the person feels both a physical and a psychological need for drugs that takes over almost every aspect of the person’s life. That is a typical progression, but as Robin L. Hoover, RN, MSN, CADCi, Director of Nursing at American Addiction Centers, points out, addiction can be variable.

AAC is in-network with many insurance companies. Your addiction treatment could be covered depending on your policy.

But one thing that might motivate people to get care, or to stick with treatment plans once they start, involves the health complications addiction can deliver.

“Health complications are among the motivational factors, but certainly not necessarily the most convincing and rarely the sole rationale,” Hoover cautions. “Many other factors come in to play for most addicted people, such as legal, financial, relationship, child custody, job/professional, family pressure, loss of loved ones through drug use, loss of basic needs (e.g., food, shelter, clothing), and more. But in my experience, the more mature addicts perceive health complications as a worthy inspiration.” 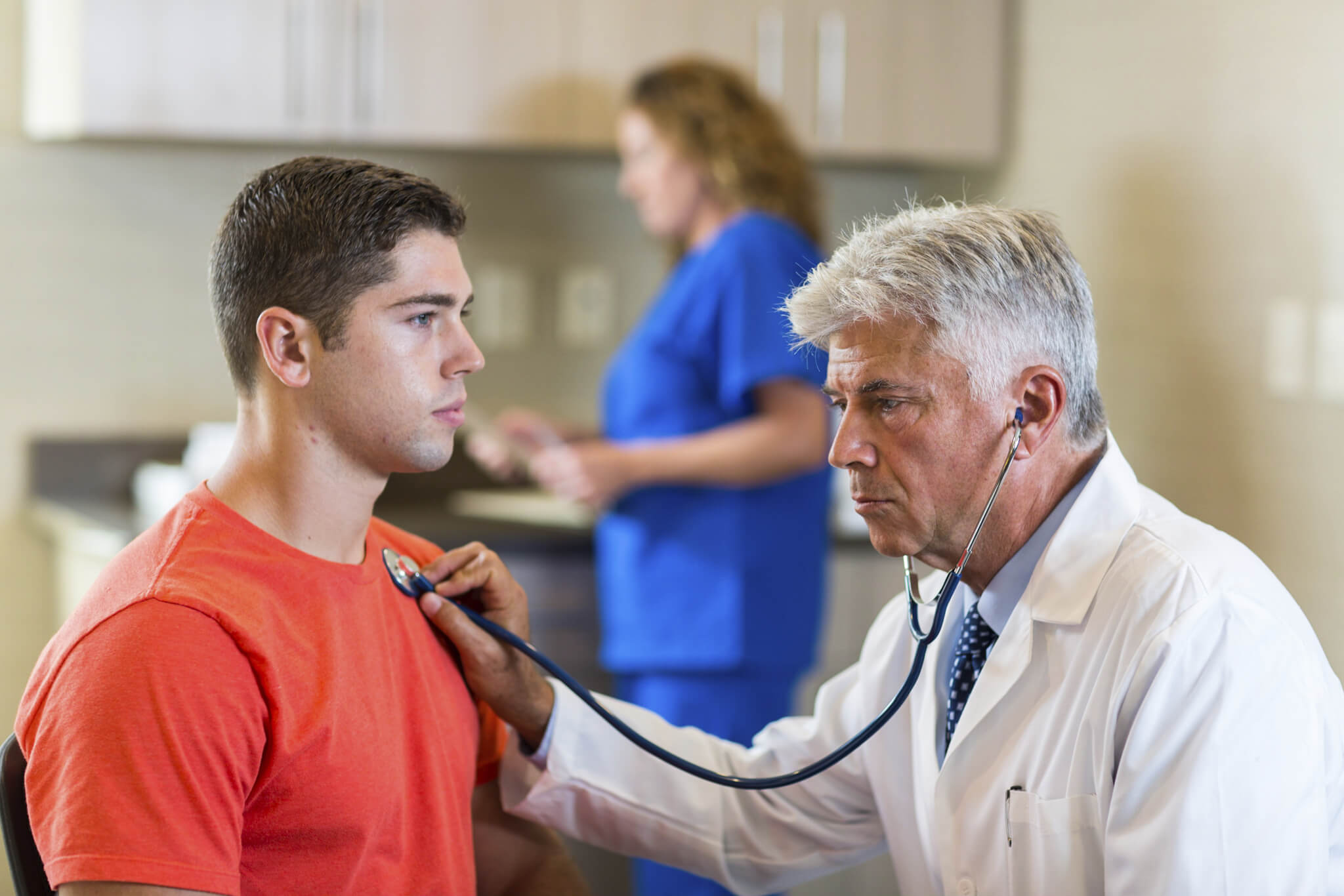 That means it might behoove families to understand the health complications associated with addiction, so they can provide loved ones with addictions a reason to consider entering rehab. Should that addicted person agree to treatment, that information could help people to stick with care once it starts.

Complications by Length of Use

Some people march right into treatment plans early in the addiction process. But it’s not at all unusual for people to live with addictions for very long periods of time before they get the help they need. For example, in a study in the journal Drug and Alcohol Review, researchers found that people who used heroin had an average time gap of nine years between first use and entry into a treatment program. What this indicates is that some people may spend about a decade using drugs before they get help, and they can face very specific health complications every step of the way. 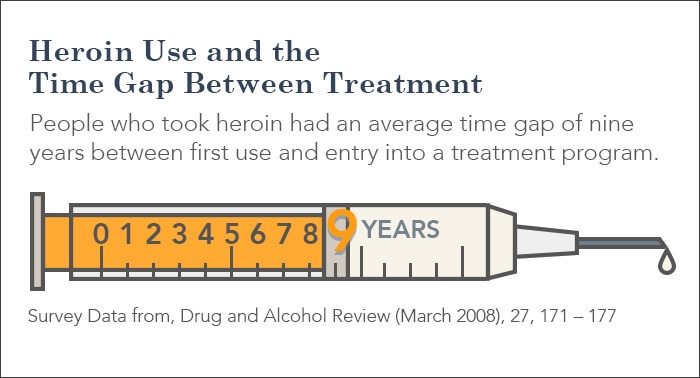 People may face various acute health risks immediately after drinking or using a drug. When asked about such immediate risks of drug use, Hoover came up with 28 different types of consequences, ranging from mild (e.g., drowsiness, confusion) to severe (e.g., loss of consciousness, tremors). She points out that some immediate consequences can lead to other types of consequences in time.

The most serious immediate concern involves overdose, and according to the National Institute on Drug Abuse, more than 17,000 people died in 2017 due to an overdose of prescription opioids. Many more lost their lives to overdoses on other widely abused substances including heroin, fentanyl, cocaine, psychostimulants or other prescription drugs (e.g., benzodiazepines and antidepressants).  Sometimes, the drugs suppress breathing, so people slide into deep sleeplike states.

Overdoses occur when the toxic effects of a drug overwhelm the individual using the substance. Sometimes the drugs suppress breathing or stop breathing altogether. Sometimes the drugs dangerously increase blood pressure and heart rate, which can tax the cardiovascular system to such a degree that heart attack or stroke may occur. And sometimes, the drugs elicit such profound sedation that a person loses consciousness.

In addition to the physical health concerns associated with the immediate use of drugs, people who use these substances can also experience very strange, altered states of perception, as well as disturbing auditory or visual hallucinations (i.e., seeing things others can’t see or hearing voices others cannot hear).

While under the influence of drugs, these people might run into traffic, attempt to drive or operate heavy machinery, or take on some other task that can lead to an accident. Sometimes, people under the influence commit criminal or violent acts, and then face law enforcement action. These immediate consequences may not be explicitly linked to health, but it’s easy to see how they might have an impact on a person’s overall physical condition.

In addition, some drugs lead to a significant physiological dependence and, when attempts are made to quit or cut back on use, severe withdrawal symptoms can make it difficult to maintain abstinence. People who feel anxious, agitated, or physically ill after stopping a drug may use again just to make the discomfort stop, and that can set them up for a lifetime of using and abusing drugs.

Immediate health consequences are easy to understand, and they can be very hard to ignore. But some health impacts tied to drugs aren’t as clear-cut. Specifically, some health issues are tied to continued use of the drug over a period of several weeks or months.

These longer-term health concerns can be quite serious. Consequences associated with longer-term use of drugs include a higher risk of chronic conditions and increased cumulative risk of acute issues as long as substance use continues. A 2017 study published in the Journal of Addiction Medicine, found 19 common health conditions were higher in patients with substance use disorders vs. demographically matched patients without a history of drug or alcohol abuse, including arthritis, asthma, chronic pain, congestive heart failure, hypertension, pneumonia, and stroke. These patients also had an elevated risk of dying—and at a younger age—than those without a substance use disorder.

Other longer-term health concerns for those who abuse drugs revolve around drug-seeking behavior; that is, when people spend a great deal of time getting, taking, and sharing drugs. This results in neglecting personal care and hygiene. For example, people using drugs at this level may not eat nutritious meals on a regular schedule, or they may just eat fast-food. They may lose a great deal of weight, and they may start to experience dental health issues, too.

In addition to a higher risk of chronic and acute disease, other longer-term health consequences associated with continued drug use includes contraction and spreading of STDs and other infectious diseases. For example, HIV or hepatitis can spread when people who inject drugs share needles with one another. The tiniest drop of blood left inside a needle has the power to infect another person. In fact, the Centers for Disease Control and Prevention reports that people who inject drugs accounted for 9% of diagnoses of HIV in the United States in 2016.

It’s important to note, too, that the risk of disease transmission isn’t only associated with injected drugs like heroin. AIDS.gov reports that alcohol, methamphetamine, crack cocaine, and club drugs like MDMA (“ecstasy” or “Molly”) have all been linked to a boost in STD transmission.

Some people develop HIV and hepatitis as an STD through unsafe sex practices. While under the influence of drugs or alcohol, users can have lower inhibitions, making it easy for them to make poor decisions about their health, such as abandoning the use of condoms or other safe sex practices.

STDs and infectious diseases can certainly be part of longer-term health consequences associated with drugs, and although many can be successfully treated with medications, addiction can make life so chaotic that sticking to a medication routine can be very difficult for people to accomplish. Some people who have these types of diseases blame their symptoms on the drugs they continue to take.

Find Rehab Near Me

“I would like addicted people to know that they have a right to a substance-free quality of life, there is hope for them
to achieve their dreams, and they are worth the effort it takes to live in recovery,” Hoover says.

That is a message that’s easy to forget. Substances of abuse can seem so powerful and so overwhelming that people might find it difficult to fight back, despite the health consequences the use can cause. But many of the medical concerns here can be treated, and addiction can be effectively managed. People can, and should, fight back. Their physical and mental health depends upon it.

Last Updated on March 10, 2022
Share
Ryan Kelley, NREMT
Ryan Kelley is a nationally registered Emergency Medical Technician and the former managing editor of the Journal of Emergency Medical Services (JEMS).
Related Topics
Related Tags
co-occurring disorders
Don’t wait. Call us now.
Our admissions navigators are available to help 24/7 to discuss treatment.
Why call us?
Get addiction help now (24/7 helpline)We’re here for you every step of the way.