Authored by Editorial Staff
Last Updated: February 22, 2022
9 Sections
6 min read
Share
What you will learn:
How a healthy diet can improve your overall health and recovery.
The power of exercise, through therapies like yoga, to support positive physical and mental heath.
Overview of the root of addiction and how to overcome addiction with healthy life habits.
Why call us?

Health is a part of life that many people take for granted. For individuals going through recovery, health becomes a tool that needs to be used, a muscle that needs to be exercised, in the fight to stay clean.

Fortunately, understandings in psychology and health sciences have broadened and diversified what can be done to heal (and boost) both mind and body in the aftermath of an addiction. Health and wellness in recovery don’t have to be regiments to simply meet a goal; they can give a person a brand new meaning and outlook on life.

Paying close attention to health is more than just a background part of the addiction recovery process. It starts with nutrition. A client who completes medical detox may be severely weakened as a result of the vomiting, diarrhea, muscle cramping, flu-like symptoms, and insomnia (to say nothing of the damage alcohol abuse does to the liver, heart, brain, and pancreas). The staff at a hospital or specialized treatment center can ensure that the client remains hydrated and fed with the right foods in the right amounts, to build up the person’s strength and get the body working again after the rigors of detoxification.[1]

Foods rich with water, such as juice and gelatin, can complement the hydration provided by treatment staff. The second key factor about food is a balanced diet that includes plenty of fruits and vegetables, as well as lean protein (such as fish or poultry), whole grain food, and low-fat dairy. Anything rich, processed, or sugary could delay physical recovery, which in turn could postpone therapy – which, in turn, could hamper long-term rehabilitation.[2]

Cereals and eggs contain vitamin B-12, which is necessary for the production of new cells in the body. Fish, milk, and carrots are sources of vitamin A, which boosts the immune system, and vitamin D, which helps with the health and strength of bones. Every health benefit provided by these foods is geared towards undoing the damage of addictive substances and healing the body after detox.

For example, in the same way that chronic alcohol consumption can cause mineral deficiency in the body (specifically calcium and iron, but also magnesium and zinc), the right combinations and amounts of food can restore the balance. Dairy foods and greens boost calcium, which also helps with bone density, and meat helps with iron levels, which are important for the transportation of oxygen around the body.[3] Zinc, also found in beef, plays a role in the immune system. 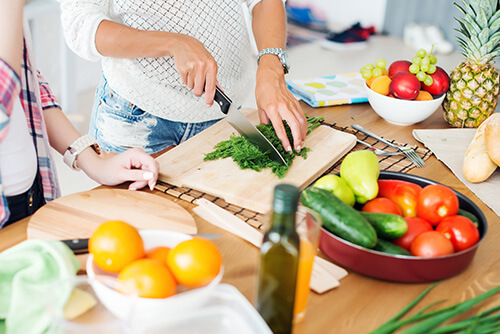 As important as nutrition is in recovery, it is not the only time food can be made a part of the process. Cooking therapy (also known as kitchen therapy or culinary therapy) has been praised for not only the way it gives clients something to do with their hands and minds, but also for how the creative application engages them on a very personal and imaginative level.

The goal of cooking therapy is not to create award-winning dishes or open up restaurants, but to give clients a new way they can invest in themselves. They can take pride in their culinary creations, and use the exercise to fill the void they once tried to fill with drugs or alcohol.

Kitchen therapy also gives an outlet for clients to work in groups, collaborating on dishes, praising the work of others, offering helpful criticism, learning from and teaching each other, and building social bonds, to develop key skills that will have to be applied and tested in the world outside the treatment center.

Medical Daily even suggests that cooking therapy increases familial bonds, which may be very useful if family therapy is part of treatment.

Quoting a press release by the Centers for Disease Control and Prevention, Medical Daily writes that parents cooking with children not only fosters a focus on healthy eating, but also cultivates healthy habits and behaviors, an approach which would easily complement the way Cognitive Behavioral Therapy looks to replace harmful thought patterns with positive and productive ones.[7]

For all the benefits of cooking therapy, there is also a very practical reason for people to invest in their food; poor eating habits can act as a trigger for a drug or alcohol relapse, says Medline Plus. For most people, the difference between a well-cooked meal at home (that could last for up to a week), and a few days of snacking on junk food while skipping breakfast, can be massive; for someone in recovery, it could threaten to derail months of hard work staying clean and healthy.[8]

Nutrition is a fundamentally important part of the treatment equation, but it has to go hand in hand with other forms of physical restoration. Some treatment facilities offer services such as tennis and swimming lessons, to encourage exercise, personal growth, and teamwork, but there are other forms of physical activity that a person can participate in, in order to develop a healthy and strong body in the aftermath of a drug habit.

Many treatment programs have started to look at holistic approaches to mind and body healing, approaches that consider the psychological and the physical to be two sides of the same coin, both of which need to be simultaneously elevated. While medical science has long supported the mental health benefits of physical exercise, new schools of thought seek to bring the two dynamics even closer together.

A blog on Hip Recovery explains that by cultivating a sense of peace from within, a person is less likely to try and find solace and escape in harmful drugs and risky behavior. The compulsion to chase chemically induced excitement and adrenaline is reduced, when the boost of a natural high has been tasted, savored, and celebrated.

The writer further explains how yoga was instrumental in eliminating the temptation to react to stressful situations with impulsivity; instead of an out-of-control response (such as anger, which would be medicated with drugs or alcohol), yoga and meditation encouraged awareness, both of self and the other person. They encouraged contemplation, control, and self-discipline – qualities that are especially pertinent to people understanding the fundamentals of recovery from addiction.

Yoga in recovery also provides a sense of community. It is likely that the practitioners are newcomers to yoga, so the learning curve of standing (or kneeling, or lying down) in unfamiliar poses allows for moments of humor, but also moments of vulnerability – moments of making mistakes and ultimately learning from them. No one will get it right the first few times, but reaching the destination together – offering and accepting help along the way – gives participants a sense of accomplishment as a member of a group, taking their first steps towards recovery together.[11] 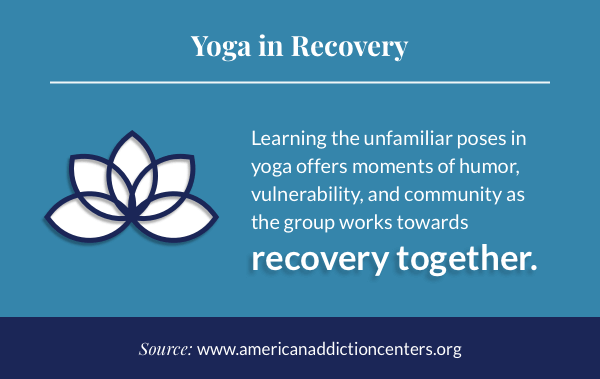 Of course, yoga is only one form of exercise available to clients in recovery. Private treatment centers usually have onsite gyms and staff personal trainers who work closely with individuals on specific fitness plans.[12]

There is an abundance of evidence that shows how much physical exercise benefits mental health, whether as a regular lifestyle or for specialized purposes. The advantages are not lost on the treatment community. The American Psychological Association writes of how, much like cooking therapy, a workout can be a fun, engaging, and inspiring exercise in itself, as well as a basic ingredient for boosting mental health in the face of depression, anxiety, and the temptation to drink or do drugs.

In the same way that cooking presents clear, achievable goals, exercise also presents landmarks that can be crossed off a list, with the idea of setting gradually harder goals. This gives clients something to work towards, and something that tracks their progress in terms of accomplishments: how many minutes spent on a treadmill, how much weight gets bench-pressed, how many repetitions, etc.

Through this, those in recovery learn that they don’t need to turn to alcohol, narcotics, or stimulants to feel good about themselves. They can see improvements in their physical form as an example of a healthy mind and body, without need for artificial boosts.[13]

Exercise certainly feels good, both within and without a treatment program, but why does it work as well as it does? And how does that factor into the treatment of drug and alcohol addiction?

When people engage in physical exercise, the activity causes their brain to release a number of neurotransmitters – chemicals that communicate information from the brain, to the central nervous system and the rest of the body. For example, one such neurotransmitter released during exercise is serotonin, which, when it is released, regulates mood. In some people, serotonin is not properly processed by the brain, which is a key factor in the cause of clinical depression (and why certain pharmaceuticals are called selective serotonin reuptake inhibitors, meaning that these drugs artificially prolong the presence of serotonin in the brain).[14], [15]

To that point, Psychology Today quotes “numerous studies” as saying that exercise (aerobics, running, and even yoga) boosts serotonin, which may be useful for those who are too psychologically vulnerable to be prescribed a regimen of antidepressants (like SSRIs), which are not habit-forming, but should be taken with care nonetheless.[16]

Even the Journal of Psychiatry & Neuroscience addressed that point (in an article emphatically entitled “How to Increase Serotonin in the Human Brain Without Drugs”), writing about thorough research on the clear demonstration of how exercise boosts antidepressant effects. The United Kingdom’s National Institute for Health and Clinical Excellence even recommends exercise over antidepressant medications for cases of mild depression.[17]

This explains the neurochemical mechanics of addiction, but how does exercise come into play in treatment? In the same way that aerobics, running, and/or yoga boost serotonin production in the brain, robust physical activity also produces dopamine. Unlike the intense burst of dopamine produced when a drug hits the brain, however, the amount of dopamine released during a workout is much more moderate, allowing the brain to process the neurotransmitter at a healthy rate. Effectively, people get a natural high that is allowed to dissipate, as opposed to an artificial high that is forced on them by an illicit substance.

To that point, an exercise physiologist at the University of Adelaide tells Bloomberg Businessweek that “exercise can be like a pill,” comparing the chemical changes in the body that arise from regular exercise to what a pharmaceutical product does.[21]

The mental health benefits of exercise are so numerous and so strong that working out has become a very popular and widespread part of recovery programs. In addition to some treatment facilities providing onsite gyms, swimming pools, and tennis or basketball courts, aftercare support groups often get together for exercise meet-ups, such as running, rock climbing, yoga, or simply going to a gym together. The emphasis on communal support and encouragement is a massive factor in a person’s mental and physical rehabilitation in the aftermath of a drug habit, providing multiple levels of protection against relapse.[22]

Recovery from a substance abuse problem does not stop at the last therapy session or the most recent support group meeting. It is an ongoing, lifelong process, but it does not have to be arduous and solitary. With the support of friends and family, and the company of likeminded individuals, health and wellness in recovery can give a person a rich, fulfilling, and healthy outlook on life.