In 2014, an estimated 21.4 million people in the United States who were 12 years old or older battled a substance use disorder, which equates to about 1 in every 12 American adults, the National Survey on Drug Use and Health (NSUDH) reported.

There are many methods and programs available to treat substance abuse and addiction, from traditional, to alternative, to complementary. More and more programs are focusing on a “whole person” or holistic approach that encompasses a variety of methods and tools to help achieve, maintain, and enhance recovery.

Yoga is a complementary, or adjunct, health practice that is often considered a natural form of medicine. Adjunct means “in addition to,” and not “in place of.” Yoga is often beneficial when used in tandem with other traditional substance abuse treatment methods.

The Yoga Journal describes modern yoga as the use of physical postures to learn how to connect mind, body, and breath to gain self-awareness and focus attention inward. According to data published by US News & World Report, around 21 million Americans practice yoga, a number that has doubled in the past 10 years.

Yoga is increasingly being used in substance abuse treatment programs and throughout recovery to help prevent relapse, reduce withdrawal symptoms and drug cravings, and provide a healthy outlet to cope with potential triggers and daily life stressors.

Yoga has many potential benefits, including:

How Is Yoga Used in Addiction Treatment?

The practice of yoga may actually help to balance some parts of the brain and body that are impacted by drug abuse in a natural way. In addition to the physical aspects of yoga, there are also many emotional benefits as well. When practicing yoga, people are attuned to their bodies, learn to regulate their breathing, and to really listen to their bodies. This can create a self-awareness of how things may make a person feel a certain way in a nonjudgmental fashion.

By focusing all energy inward, individuals can learn to take ownership for the way they feel and gain control over themselves and their subsequent actions. In so doing, they may also become more self-reliant and self-confident. By recognizing cravings when they occur and not attempting to avoid them or give in to them, for example, a person may be more able to cope with and manage these feelings if they are more physically aware of them when they occur.

Yoga can also increase energy levels, encourage people to eat better, and improve quality of sleep that may be disrupted by drug or alcohol withdrawal symptoms. When people feel better physically, they are more able to handle stress and anything that may come up during the day. More sleep means a clearer head and lower irritability levels. Physical exercise can also improve self-image, as healthy habits can improve the appearance of the physical body as well.

Many of the 12-Step programs individuals join during treatment and recovery to garner support are steeped in spirituality and spiritual concepts. Yoga can enhance this and help individuals to reach that spiritual connection through breathing techniques and mindfulness meditation. Quieting down all external influences through yoga may help a person to find inner peace through self-reflection and come to a personal realization of what may need to change to improve life.

Yoga goes way beyond just stretching. It can be beneficial as a part of a substance abuse treatment program and can be practiced independently as well. When used in conjunction with other traditional therapy practices, yoga can be a wonderful adjunct therapy that individuals can practice throughout their lifetime to calm themselves and improve clarity of mind whenever needed.

Explore Rehab Centers Near Me That May Offer Yoga

Is Yoga Therapy Covered by Insurance? 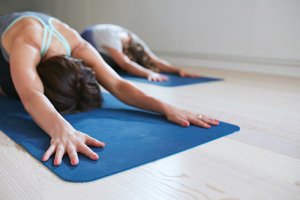 One of the great things about yoga is that it doesn’t require expensive equipment or a special location; it can be practiced pretty much anywhere at any time as needed. Coming from the Sanskrit work yuj, which is interpreted to mean “union,” yoga is an ancient technique designed to bring mind and body closer together with the use of exercise, meditation, and breathing.

The most common form of yoga practiced in American today is likely hatha yoga, which focuses on physical postures and breathing techniques, the American Yoga Association publishes. When first learning yoga, it is helpful to attend a class or find a trained yoga instructor. Classes are generally 45 minutes to 1.5 hours, and focus on achieving specific postures while controlling breathing in certain ways. By posing the body in a specific way, the flow of energy is said to be opened as the spine and other parts of the body are properly aligned. This allows the mind to open up, creating balance between mind and body.

While yoga is not a religion, it can be spiritual as individuals may experience spiritual growth through practicing yoga regularly. Yoga can be practiced by anyone on an as-needed basis and is thought to increase the bond between mind, body, and soul.

Yoga’s Effects on the Brain

When someone abuses drugs or alcohol regularly, some of the pathways in the brain are altered, and the pathways related to feeling pleasure, regulating emotions, making sound decisions, and controlling impulses may be negatively affected. After a period of time without the influence of drugs or alcohol, brain chemistry and circuitry can heal and rebuild itself. Yoga may be able to help with this as well.

Yoga has long been used to help relieve stress, and scientific evidence has provided a link between practicing yoga and the reduction of stress by modulation of the stress response, Harvard Health reports. When a person feels stress, heart rate, blood pressure, respiration, and body temperature increase. Yoga may actually act on this system by regulating and balancing some of the stress hormones like cortisol and adrenaline, the Yoga Journal publishes. Grey matter and regions of the brain active in controlling stress, like the hippocampus, may also be enlarged with the regular practice of yoga, as published in Scientific American.

The Journal of Alternative and Complementary Medicine also reported on a study that showed an increase in the levels of gamma-aminobutyric acid (GABA) with the practice of yoga techniques. GABA is a kind of natural tranquilizer produced by the brain to help manage anxiety and the stress response. Higher levels of GABA usually mean less anxiety and less stress. Stress, anxiety, and depression are common side effects of drug withdrawal, and the use of yoga in recovery may actually work to improve these symptoms.

A study published by Harvard Health on a group of women who reported themselves to be “emotionally distressed” practiced yoga for 1.5 hours twice a week. At the end of three months, half reported less depression, a third cited fewer anxiety symptoms, and 65 percent claimed an increase in overall wellbeing. Over 80 percent of the people practicing yoga in the United States, according to a National Health Interview Study (NHIS) in 2012 published by the National Center for Complementary and Integrative Health (NCCIH), reported a reduction in their stress levels as a result.

Last Updated on November 18, 2021
Share
Editorial Staff
The editorial staff of American Addiction Centers is made up of credentialed clinical reviewers with hands-on experience in or expert knowledge of addiction treatment.
Related Topics
Related Tags
therapy
treatment
Don’t wait. Call us now.
Our admissions navigators are available to help 24/7 to discuss treatment.
Why call us?
Get addiction help now (24/7 helpline)We’re here for you every step of the way.